Last week, I received an email from my mother’s long-time friend. The email consisted of vicious, short-sided cartoons and quotes about President Obama, protesters in Ferguson, Muslims, Hillary Clinton, and Central American children who’ve made their way to America.

In the past, she’s sent skewed Republican crap, but this latest collection filled me with disgust for many reasons.

First, her husband was a vice-president at IBM, who no doubt had a hand in out-sourcing jobs, and scaling back American operations. Maybe he contributed to some of the bad decisions by upper management, which has resulted in nine consecutive quarters of losses, and IBM’s determination to sell off their PC, low-end server, and chip-manufacturing units.

Last July, Rich was laid-off from IBM, after training his “replacements” in Brazil. He was 18 months shy of the earliest date he could have retired. Fortunately, he landed a good contract role at Microsoft, but he missed out on IBM’s retirement benefits, and he’s certainly not earning the same amount of money or benefits as previously.

I’m sure my mother’s friend’s husband retired with full benefits, and a generous pension plan.

Since having to leave Microsoft, I’ve struggled to land a decent job. While my current role pays well, it comes with no healthcare insurance, no sick time, vacation or holidays. I can either go without healthcare benefits (not a good idea) or sign up through the Washington Healthcare Exchange. I’m mortified that I need to use a government-sponsored program, but what choice do I have? 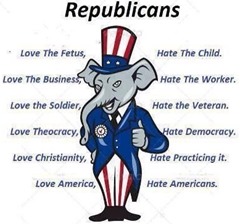 I’m sure my mother’s privilege friend is in favor of repealing what she’d term “Obamacare.”

One of the quotes she sent said President Obama’s presidency [could be] summarized in a chapter… fitting on one page… as a single paragraph… holding just one simple sentence… which would be abridged.” If Obama’s accomplishment from improving the economy to reducing unemployment, increasing energy production and efficiencies, reforming healthcare, expanded anti-discrimination laws, increasing access to student loans, and remaining calm and reasonable in light of outrageous occurrences in American and around the world, than I can only imagine what would be written about Republicans in Congress.

Words that come to mind are inflexible, unpatriotic (i.e. involved in activities that harm your country), deceitful, and intolerant.

I’m hard pressed to think of anything positive ANY Republicans have done to help anyone who wasn’t in the top 1% or a corporation. They’re adamant about outlawing abortion, but unwilling to support programs for low-income children that provide access to food, housing, healthcare, and equal opportunities. They’re vigilant about gun ownership, failing to recognize the horrendous shooting that flood the news. They rant about taxes yet ignore the fact that millionaires pay less taxes than factory workers. And many corporations avoid paying any taxes while enjoying record earnings, and paying their executives, thousand-fold more than the people doing the work.

According to Senator Bernie Sanders (I-Vt.), “At a time when 1 out of 4 corporations pays NOTHING in federal income tax, in a given year, and when many working people pay a higher federal tax rate than billionaire hedge fund managers, it is time for REAL tax reform. The wealthy and powerful must begin paying their fair share of taxes.”

Making the rounds on Facebook this week, Senator Sanders continued, “Here’s what income and wealth inequity is about. Last year, the top 25 hedge fund managers made more than 24 billion, enough to pay the salaries of 425,000 public school teachers. This level of inequity is neither moral nor sustainable.”

It’s inconceivable that Republicans can be so critical of President Obama and the democratic policies, yet so forgiving of eight years of the Village Idiot who not only burned through the budget surplus left over from President Clinton, but bankrupted the US Treasury, creating the largest annual national deficit in US history. Two million Americans lost their jobs during his first year in office. Personal bankruptcies soared, there were record home foreclosures, a massive drop in the US stock market, and we entered two groundless wars. While people perceive the Village Idiot was fiscally conservative, he increased the national debt by 115% versus 37% by President Clinton, and 16% by President Obama.

Yet, my mother’s friend found it necessary to share a Photoshopped picture of an African American girl handing money to President Obama who is holding a bag labeled “Deficit,” with a caption that reads, “Are you sure that’s your fair share?”

Other cartoons she sent are about President Obama going on vacation while the Middle East is in turmoil. Unless you’re a Republican, I doubt you’d see anything wrong with the infrequent vacations President Obama has taken to spend time with his young daughters and wife.

After all, Congress has been on vacation since the end of July, and is expected to work a handful of weeks between September and the end of the year.

In the eight years he was in office, the Village Idiot took 149 trips to Camp David, 77 visits to his Crawford ranch, and 11 trips to his father’s Kennebunkport mansion. That’s an average of 30 trips per year, at tax payers’ expense on Air Force One. Each trip to his Texas ranch cost over a quarter million dollars.

My mother’s friend lives in Reno, Nevada, where 20% (3% above the state average) of the people have incomes below the poverty level, which is $11,490 for a single person, and $23,550 for a family of four. The Nevada minimum wage is $8.25 per hour, which works out to a little over $17,160 per year if you work 8 hours a day, 5 days a week, taking off no time for holidays, doctor visits or mishaps like lack of transportation, sick family members, or having to attend to personal business like voting (unless you live in a gerrymandered district where your liberal votes don’t count).

I wonder how much my mother’s friend contributors to her local community? Does she realize the poverty that exists when she shops at her community, buys a hamburger from a middle-aged woman working at a fast food restaurant, complains about the condition of her upscale hotel room cleaned by underpaid cleaning staff, and loses patience with the kid pumping gas who couldn’t possible earn enough to pay his way through college and earn an engineering degree like her husband did in the 1950’s?

This discussion bring me to another theme, which ran through the collection of cartoons she shared, that of children from Honduras and other Central American countries making the dangerous trek to America, in hope of a better life.

The observation she shared, titled “Some food for thought,” provided an analogy about “3 year old to 8 year old” children walking from Houston to Minneapolis by themselves with no food or “belongs” to sustain them. The analogy continues, babbling (in 6th grade English) about avoiding towns and cities, having no maps or “sun protection,” and how the whole truth isn’t being shared. Concludes the missive, “Someone created and assisted this, and the media should be figuring out who it is.”

First, young children aren’t making the journey themselves. They travel in groups, usually at night, often with the assistance of smugglers. They don’t walk the entire way, they ride on top of trains, take buses, and maybe even hitch rides in cars. It can take months to arrive at the border. Many perish, get injured or are victimized.

Putting the journey aside, consider how desperate the parents of these children must be to sell everything they have, and trust them with shady smugglers with the hope, they’ll make it to America, and miraculously be allowed to stay.

No doubt, if my mother’s friend and her family lived in Honduras, with the world’s highest murder rate, coupled with rampant gang violence, and dire poverty, she’d do whatever was necessary to get her twin grandson’s to a safe haven, even if it meant selling everything she had, and making the gut-wrenching decision to send them on a dangerous journey. Maybe then, she’ll understand there’s no humor in poverty, corporations outsourcing jobs, protections for the rich, and the rapid disintegration of the American middle class.

It is commanded: Justice shalt thou pursue.

A worthy admonition, yet it is not enough to merely pursue; we must act and judge with justice. We must administer justice fairly, evenhandedly, and without bias.

For if we cannot extend equal justice to all, we cannot be assured of justice for ourselves.

Nor can the scales be reset for each one, pressing a thumb too heavily, or tilting the balance too favorably.

It is said Justice holds the scales, eyes blindfolded, lest she be accused of a blink, but O Lord, in our pursuit of justice for all, we must keep our eyes wide-open, and untarnished with self-interest or prejudice.

I initially read this invocation during the recent Supreme Court Hobby Lobby lopsided debacle, which is actually not as horrendous as the Court declaring corporations are people. When a corporation can audibly fart, I’ll believe it has the same rights as an unborn embryo, but certainly not as many as those of a Honduran or Salvadorian orphan who’s slipped across the US border, hoping to escape rampant violence and tyranny.

The point being, justice has become a travesty in America. Its definition twisted, depending on the political or religious slant-of-the-day. Forget the amusing analogy of Lady Justice pressing her thumb a bit too hard or blinking. What’s happening is frightening.

A fetus that can’t survive outside the womb shouldn’t have more rights than a pregnant woman who got that way because of incest or rape. And a teenager who’s seen his family and friends indiscriminately shot, shouldn’t be sent back to the same place after they’ve miraculously made the journey to America.

Corporations? Maybe they’re human. After all, they exhibit the human traits of greed, selfishness, and arrogance, distilling their efforts on making money for executives and stockholders rather than funneling earnings back onto their infrastructures: rewarding and motivating employees, strengthening their physical and virtual infrastructures, conducting research and development that supports and extends beyond their endeavors, and investing in their communities and environment.

While the definition of a corporation is a group of persons united or regarded as united in one body, they’re more akin to expecting the many to benefit the few. Case in point, Adecco has 31,500 full-time employees whose salaries is gleaned from the mark-up on the hourly rate of 650,000 associates in temporary positions. In 2013, 91% of Adecco’s revenues came from temporary workers.

In the United States, Adecco realizes excellent earnings by offering associates few benefits, including “preventive” rather than full healthcare coverage, no paid time off (sick time, vacation or holidays), and fluffy words like “Better work. Better life,” which does little to pay the bills.

For the first half of the 2014, Adecco revenues increased 2%, 5% in constant currency. Their gross profits were up 4% or 8% in constant currency, owing to a gross margin of 18.4%. To reduce costs in North America, they restructured, reducing full-time head count, branch optimization (i.e. fewer people, doing more work), and moving to a single headquarters.

While Adecco associates in America are forced to do without healthcare insurance, and take national holiday off without pay, Patrick De Maeseneireb, the CEO of the company, earns 6,072,310 Swiss Franc or around $8,134,000 per year.

No doubt, Adecco has a platoon of lobbyist, manipulating politicians’ and governing entities to ensure they can write-off as much as possible and skirt having to offer benefits, unless required by law.

At one time, America set the bar for civil liberties, quality-of-life, ingenuity, and opportunity. The bar is slowly inching down, compromising justice and equity for all.