While my grandmother was introverted, my grandfather was extremely extroverted with a keen sense of humor and childlike delight. The only boy in a family of seven older sisters, he had bright red hair, which further called attention to his unique wit. Until his last breath, he’d regularly walk up to strangers, start a conversation, and inevitably share a humorous observation.

Throughout the years, my grandmother typed up tributes to his humor. And then lost, rewritten, and lost the tributes again. She wrote, “I don’t know how many copies there might be around. I hope each includes another incident of his humor and wit.”

Anyone can make another cry, but who can make another laugh is blessed. Morris is thrice blessed. He can make the dourest of men cackle with glee. The laughter rises, bubbles out of him. And the words have a special child-like innocence. They are funny, outrageous, unexpected – never demeaning or lewd.

Julie, as a young child, wrote on a greeting card, “Grandpa always says the right thing to break the tension.”

His wit is spontaneous. I’d shake my head in wonder as to how he could switch the serious to reveal the humor.

For last Mother’s Day, Allan [son] and Elaine [daughter-in-law] gave us a lovely kitchen wall clock. When we next met at Douglas’ [grandson] house, Morris out of the blue reminded Elaine of the clock. Then putting on a face of mock dismay he lamented “Oh that clock is giving us so much trouble.”

Some weeks later, when Allan stopped over, Grandpa said to him with a straight face, “That’s a terrible clock you gave us.”

Allan inquired, and the response was,” Because every time I look it has a different time; never the same!”

Now who else would think of anything so ridiculous; it evokes genuine laughter.

Some people have inferred our house must peal with laughter all day. However, Grandpa could roll out a barrel of lightning and thunder when displeased. He could also find cause for turning off the scowl and putting on the grin.

When we’re at Ralph’s [grocery store], and Grandpa is wandering down the aisles, I’m not surprised when I hear bursts of laughter from some corner.

I shake my head in wonderment as to where his humor derives. Surely not out of these pens, whose ink keep running dry.

My grandparents lived in Burbank, California, which enabled them to save on electricity by using a clothes line instead of a dryer. As a child, I remember handing my grandmother, Rose, clothes pins as she hung out the week’s wash.

They lived in a small bungalow with a tiny utility room off the kitchen for their hot water heater, wash tub, several narrow cupboards for storing food and cleaning supplies, and a small washer with hoses and cords awkwardly stretched to reach the plug, faucets, and drain.

No doubt, the washer was considered a luxury, justifying it’s coveted place in the utility room, and need to cater to its peculiarities. One afternoon, it showcased how we tend to mindlessly perform routine tasks.

One morning, just as Grandpa was coming in the back door, I heard the washer complete its cycle. Busy in the next room, I called out, “Honey, will you please shut of the faucets.”

Preoccupied with some gadget in his hand, he nevertheless stopped and shut them off.

Later, I noticed he had not disconnected the electric cord, and he happened to be outside within earshot, I called to him, “Honey, next time you shut-off the faucets, will you first…”

I got no further.

He called back, “I didn’t shut off the faucets.”

And you know me, always trying to prove my point, I insisted he come in and let me show him. “I never leave it like this I always disconnect the electric cord first, like this,” I explained as I pulled out the plug.

Re-opened the faucets, I showed how I stretch the cord across both faucets, letting the end dangle. I then continued, elaborating on how when I close down the handles so it can’t fall behind the washer or get entangled in jumble of other cords and hoses behind the washer.

Grandpa listened, and watched me in silence. When I finished, he asked quite coldly, “Are you insinuating that I am losing my marbles, that I don’t know what I am doing or what I did?

“Of course not,“ I assured him, “it’s just that we do things so automatically…” Turning away, I could see he was rather disturbed. I had the good sense to shut my mouth along with the faucets.

Later that evening, not wanting to make an issue of it, or discuss it further. I hurriedly threw in a remark during a TV commercial that he was exaggerating the importance of that memory lapse, and he should have no doubts about his mental alertness.

But let’s face it. As we get older, we are inclined to get more forgetful and absentminded. I don’t think, however, it is due to mental deterioration as to our being creatures of habit, and automatic reaction. As we get older, there are more things we learn to do without forethought.

It was not necessary for Grandpa to disengage his mind from the gadget in hand in order to disconnect the faucets. His fingers knew to comply without calling upon his mind for directions.

The other day, I looked high and low for a spool of thread to find I had accidentally put it where it belonged, which is the last place I’d think of looking. I just shrugged my shoulders and called myself an idiot. What would I gain if I sat down and worried about it?

I think it’s a healthier sign to be able to do ordinary tasks without conscious thought, even if we don’t remember having done them, than to be burdened with constantly having to be aware of the actions of our body. If doing routine tasks means wholly concentrating on the step-by-step tasks of directing our fingers, hands, arms, and legs, we’d never get beyond buttoning our shoes.

I do believe in providing gentle nudges to my memory. While I once I might have prided myself on not needing reminders, now I am not ashamed to circle on the calendar when bills are due, important dates, things to buy, tasks to do, and when someone is scheduled to visit or I’m supposed to be somewhere.

My desk and is peppered with notes and reminders.

Of course, I may promptly misplace the lists and reminders, but then I could always write another reminder to remind me to look for a reminder that…

It’s been an exceptional year for growing produce. Our garden in Mount Vernon has produced piles of radishes, carrots, lettuce, arugula, kale, peas, beans, broccoli, cauliflower, yellow tomatoes, cucumbers, and in the past few weeks, a dozen or more huge zucchinis.

On Saturday, Rich and were at a picnic. We brought three large zucchini, which we hoped to pawn-off onto other. One woman, Bernie, was delighted to take one of our mammoth squash.  She said she was going to make meatloaf out of it. 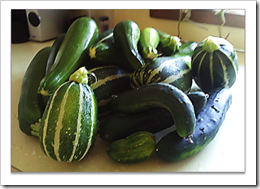 She shared her recipe, which I made on Sunday…

By the Hebrew calendar, we are approaching the dawn of a new year.

For us, crossing the threshold into a new year is not a time for boisterous celebration or frivolity. It is a time for serious introspection, looking within and taking stock of ourselves and our actions.

It is a time for facing our failings and resolving to improve the conduct of our lives in the coming year. It is also an opportunity to confession to ourselves.

We can promise only to do the best we can, and the most we can — to strive to live in peace with ourselves and those around us and never bear malice towards another.

May our promise be acceptable to You, O Lord, and serve as a guiding light to ourselves.

I’m munching on Cheetos while I contemplate whether there’s a hidden message in what my grandmother wrote. The phrase, which keeps sticking in my mind, is “never bear malice toward another.” Yet, in the previous sentence, she wrote “… promise to do no wrong, and cause no hurt…”

Malice is the intent to do harm. It can be emotional, physical or an unlawful activity that hurts another. Promising not to hurt people through unlawful or physical activities isn’t difficult. Anticipating how an action could cause emotional hurt isn’t as easy.

A word said in jest, a smirk, casual comment or ignoring or overlooking someone’s immediate needs can hurt another’s feeling. And depending on what took place, the pain could be worse than physical harm.

Is a child more hurt than a spanking or being called stupid? Does the stink of being called a fatty worse than being pushed or defamed?

While it’s challenging to avoid emotionally hurting another — with a careless word or failing to respond to their needs — as my grandmother wrote, you can aim not to bear malice towards another. You can do your best to treat others with respect, responding to their calls and letters, providing support when needed, and sometimes putting their needs before your own.