Rather than write about the start of our recent sailing adventure in the British Virgin Islands (BVI), I decided to provide the ending first. It’s like flipping to the back of a novel when you can’t decide whether it’s worth the time and effort to wade through the rest of the pages.

Our final day in BVI was spent at the historical Fort Burt Hotel, which was built in 1666 by the Dutch. In the 1950’s it was turned into a hotel. We were thrilled with our room, which provided a view of the marina, Road Town, and the surrounding hills. Three of the pictures in this blog were taken from our room’s balcony. The pool was a short walk away.

Having slept nine night in a v-berth on a thin mattress with a cranky sun-burned wife, Rich claimed the king-sized bed made him feel like a cherry resting on fluffy cream cheese icing, slathered on a carrot cake.

After a glorious day recharging our batteries, we finished packing our bags, turned out the lights, and slept soundly until the alarm went off at 4:45 a.m. Thirty minutes later a taxi whisked us towards the airport.

Because there is no public transportation in BVI and relatively few cars, it’s common for people to hitchhike. And in the seven years since we visited, everyone seems to have acquired a cell phone, which is permanently affixed to their ear. Given these facts, it was no surprise that our taxi driver received a call, and on the way to the airport, he took a side street to a slummy area to pick up a mystery package from a supposed friend. He then returned to the main road, and a few minutes later, gave a lift to a women who needed to go to the airport. We were the only people, however, who had to pay the fare.

In spite of the early hour, there was a lengthy line in front of the American Airlines window. We were unruffled, though, knowing we’d left plenty of time to check our luggage, go through security, and get on the plane. Rich was pleased that he’d carefully packaged our bags. The bottles of water, cans of soda, and a bottle of rum from the boat were in our carry-on bags; snorkel and fins, clothing, and sailing gear in two large Army duffle bags; and my beloved netbook, Sputnik, with pictures and notes from the trip, secured in a satchel and slung over my shoulder.

If you read the paragraph above carefully, you would have realized we were moments away from committing the first of the day’s many mistakes and SNAFUS. You can’t have containers with more than 2 ounces of liquid in your carry-ons. The bottle of rum had to go. And the sodas and waters either drunk or poured out.

Fortunately, the ticket agent was thinking clearly and offered to place the rum in one of our duffle bags, which of course, had already been tossed onto a conveyor belt and zipped outside to be placed on the plane. And unbeknownst to us, she checked both of our duffle bags under Rich’s name. She also recommended that we hurriedly drink the sodas before going through security.

While chug-a-lugging the sodas, Rich decided to dump out the water. I recommended that he pour it on some plants. He returned moments later, a smile from ear-to-ear, with two empty water bottles and a cream-colored cat in the crook of his arm. There are many stray cats in BVI who are receptive to petting and nuzzling for food scraps. So in a sense, it wasn’t remarkable to find a cat lounging just inside the airport. The cat was a nice distraction and we hoped a good omen for the long trip home.

We were wrong on all accounts.

After handing my boarding pass to the screener, I was told to step aside, where I was searched from head to toe, and everything in my carry-on bag was taken out while I was questioned about my visit to BVI. Finally, I was told why my luggage and I were subject to such a thorough examination. An “SSSS” (Secondary Security Screening Selection) appeared on the top of my boarding pass, which required an enemy-of-the-state-level of scrutiny. The inspectors even walked onto the tarmac to track down and search my luggage before it was loaded onto the plane.

They were in for a surprise. There was NO luggage for ”Julie Lary” because the agent had checked both bags under Rich’s name! Had this not been the case, we would most assuredly have missed our plane.

But, the fun was not yet over, my carry on luggage and I were re-inspected once again at the gate, making Rich and I the last people to get on the plane.

The forty-five minute flight to Puerto Rico was blissfully uneventful as was our trip through customs and immigration. Once again, however, with an “SSSS” on my boarding pass, I was thoroughly inspected, and my carry-on bag and Sputnik unpackaged and swabbed for explosive residues. They also decided to inspect Rich and his large bag full of sailing gear. We now know that there are no explosive materials on his binoculars, GPS, video camera, digital camera, sailing books, empty water bottle , and wallet.

After getting cups of coffee and Cinnabons, we waited to board a 7.5 hour flight to Los Angeles. Just as they were boarding the first class passengers, Rich was paged. He was informed that we’d failed to claim our luggage at customs. Rich grabbed our boarding pass out of his backpack and with an American Airlines agent in tow, sprinted back to customs.

The bags were by the baggage carousel so it was just a matter of Rich grabbing them. With the help of the agent, he was able to cut to the front of the line and whoosh through customs. The next challenge was getting through the screeners, which immediately presented a problem because Rich had inadvertently grabbed our tickets for the Los Angeles to Seattle flight instead of the ones for Puerto Rico to Los Angeles.

Fortunately, the agent directed him to the American Airlines help desk, which reissued the Puerto Rico tickets. Aside from being thoroughly searched again, he was able to race back to the board area – shoes in hand and breathing hard – to join me in getting on the plane. Fortunately, we had exit row seats that were in back of first class. We simply needed to make it through the door, cross the aisle, and flop down on our seats.

Prior to the custom’s commotion, I’d purchased what I hoped was an engaging book to read, Relentless by Dean Koontz. I started the 7.5 hour flight by finishing up a magazine and the newspapers we’d brought. I then dove into the novel. By the time we got back to Seattle, I’d nearly finished the book. Dean Koontz is a fabulous writer! Funny! Suspenseful! Innovative!

Since the food selection at the Puerto Rico airport was awful, I recommended to Rich that we buy food on the plane. I’d read that the package meals on the plane are usually very good and inexpensive. Sure enough, when the cart came around, they had a nice selection, at a premium price of course. 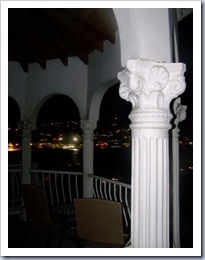 Rich handed them his credit card and ordered two Boston Market grinder sandwiches with chips, a cheese, dried fruit, and cracker plate, and a large cookie. Leftover from sailing, we had a package of Japanese crackers, some Costco dried fruit and nut mix, and Jelly Belly jelly beans. I recommended to Rich that we space out the food over the 7.5 hour flight. Every half hour or so, he informed me how close we were getting to our next food indulgence.

Los Angeles was smoggy-foggy when we landed. We were optimistic that our luggage had also landed and wasn’t saturated with rum from a broken bottle inside. Putting our concerns aside, we got on a shuttle bus to the Alaska/Horizon terminal. Three minutes on the bus, Rich jumped up and exclaimed that he left his wallet on the plane.

I’m not making this up!

The shuttle driver turned around and barely came to a stop before Rich jumped of the bus and raced for the door. We scrambled across the busy American Airlines terminal and Rich ran down towards the plane we’d left ten minutes earlier.

Writing this, I can’t believe that he wasn’t stopped by some security officer! Undeterred by his lunacy, he ran back onto the plane and looked around our seats. No wallet. He then frantically searched through his backpack. Vola! Wallet!

Back to the shuttle bus. By the time we reached the Alaska/Horizon terminal, my patience was thread-thin. When Rich started scurrying around looking for the gate, I went the opposite direction and found the “departure and arrival” board, which confirmed I was in the right place to get on the flight back to Seattle.

Of course, Rich was furious when he found me and decided to quench his fury by buying more food. His choice was a Burger King “Bessie Cow” burger with French fries and a large root beer. To appease me, he bought from Starbucks a tasty turkey and cheese sandwich on chewy bread.

Listen. You’re a hostage in an airport. You might as well eat.

The flight to Seattle was nearly three hours, which gave me plenty of time to read Relentless. In the row in front of us were two little kids who were ricocheting off the ceiling before we took off. They proved to be little angels for the entire flight and were kept engaged by their mother.

The monsters in the row behind us were another story. Nevertheless, we were relieved that nearly 18 hours of flying and being at airports was coming to a thankful end. We arrived at the BVI airport at 6 a.m. (3 a.m. pacific time) and landed in Seattle at around 9 p.m.

When we got home, we were too wired to sleep so we unpacked our bags, conversed with the cats, inspected our plants by flashlight, and then watched some TV before crawling into bed, twenty one hours after we’d gotten up at the Fort Burt Hotel in BVI.

And our luggage. It was waiting for us in Seattle. The bottle of rum didn’t break and neither did the two small conch shells we’d packed.