On Monday morning, after leaving Ganges on Saltspring Island, we headed to Cowichan Bay (below), which the free visitor guide calls “a quaint, funky, seaside village.” We arrived a little before two o’clock and had to quickly tie to the dock with gusty winds determined to blow us the opposite direction. No sooner had we secured boat when the harbor master paid us a visit. He wanted to know if we were going to spend the night.

Evidentially, after 2 o’clock, you can’t tie up to the public dock without paying the overnight fee. We asked the harbor master if we could spend 45-minutes zipping through the town and he reluctantly agreed.

The town has the expected eateries and pubs, art galleries, gift shops, docks of boats and house boats, tourist activities like whale watching, floatplanes, and sea kayaks, and charming inns and bed-and-breakfasts. What we found most interest and the sole reason why we’d return to Cowichan is the Maritime Center. This unusual museum is a series of small buildings that stretch across a dock, which was once a condemned fuel loading dock.

At the foot of the dock is a large building where boatbuilding skills are taught. Herb Rice, a Coast Salish Native Indian artist, has a studio at the front of this building where you can watch him carve, see his artwork, and even take a wood carving class.

Between this building and the dock were several small wooden boats in various stages of completion and restoration. The art of bending, shaping, and sealing wood to create a waterproof craft must take decades to master.

The galleries, along the dock, house collections of outboard engines, pulleys, lines, engines, oars, small wooden canoes and rowboats, and boatbuilding tools. Because these galleries are open on both sides and built over the dock, it’s like walking through someone’s workshop or garage. 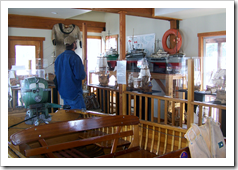 At the very end of the dock is an enclosed building, which houses amazing 1/96 scale model ships (left) by Ewald Dwersteg, whose patience as an ear, nose and throat specialist surgeon provided him with the discipline to make extremely detailed models.

Fishing vessels, carved from a single block of wood by Harvey George, an elder native carver of the T’Souke band, are also on display. I found these boats most interesting because it’s unusual to see models of commercial fishing vessels. Unlike Dwersteg, George carves from memory and eye without referring to drawings and archeological articles.

Also in this building was china from dozens of cruise ships along with other maritime memorabilia.

Spinning in the Galley

After our whirlwind tour of Cowichan Bay, we motored a few miles to Genoa Bay to drop anchor for the night. It’d been a windy day, which escalated when we started to look for a place to anchor. We had no problem anchoring and “holding,” but with the consistent 20 knot winds, Rich was concerned that we were too close to the shore.

Up went the anchor. This time, we dropped the anchor when we were exactly in the middle of the bay and it held us in the middle… theoretically. The wind was gusting so hard that looking up from the galley to the cockpit, the scenery flashed by. It was like being on a merry-go-round.

From Cement to Flowers

Months before our sailing adventure, I’d read in several sailing books that you can grab a mooring ball near the back gate of the Butchart Gardens on Vancouver Islands. I was anticipating walking half or mile or so to the entrance of the gardens.

It was an unexpected surprise to discover the gate into the garden was within swimming distance of our boat… provided you were a seal or sea lion and could tolerate ice-cold water. It was super easy to grab a mooring ball in the protected cove (right) and then tie a stern line, 100 yards or so from the back of the boat. I’m glad Rich paid attention as to how to do this maneuver; it required he rig up a large spool of nylon line so it unrolled as he rowed to shore in our dinghy. He then had to secure the dinghy, get out, and stand on a pile of slippery rocks while tying the line to a ring in the rock face.

After this tricky maneuver was completed, we were ready to dinghy over to the dock by the garden gate. We used an intercom to order the tickets. Slipped a credit card into the machine, and voila the magic gate swung open…

In 1888, dry goods merchant, Robert Pim Butchart, began manufacturing Portland cement, using limestone deposits, which were plentiful in the area. When the limestone quarry near his home was exhausted, his enterprising wife, Jennie, conceived a plan to refurbish the bleak pit. Top soil from nearly farmers was hauled to the quarry by horse and cart. Little-by-little the quarry began to blossom into a sunken garden.

Throughout the years, Japanese, Italian, and rose gardens were added to the estate, which was opened up to the public. Each year over one million bedding plants, consisting of seven hundred varieties, are used throughout the gardens to ensure uninterrupted blooms from March through October.

In the winter, the garden is illuminated with lights and an ice ring is set up in December. In the summer, there are weekly fireworks displays. Check out these videos to see the various seasons of the garden.

The day were visited, the weather was extraordinary, considering it poured the day before and two days later. We striped down to short-sleeve shirts as we wandering through the gardens, taking nearly two hundred pictures!

The dahlias were in full bloom along with fuchsias, begonias, chrysanthemums, impatiens, marigolds, petunias, hydrangea (groan), zinnia (I usually don’t like them, but they had itty-bitty ones that resembled marigolds), salvia, and much, much more!

We spent nearly the entire day at the garden. When we got back to our boat, we watched the sunset as we sipped wine and ate cheese and crackers.

f us in front of a recently installed water feature at the garden. You can see the craggily rock, which is now covered with trees, and creeping plants. When Mrs. Butchart started creating the garden, there was only several large, barren pits where the lime had been removed along with several mounds of solid granite. Suspended by ropes, Mrs. Butchart would find shelves in the granite, add a handful of dirt and plant a piece of ivy, cotoneaster or other creeping plant.

Her efforts are now enjoyed by over one million visitors per year.