After a day of sunny weather, spent in the Butchart Garden, we woke to overcast skies and the top of the boat was wet from drizzle. We pulled on our rain gear to keep dry and headed to Finlayson Arm, a narrow channel, which according to our sailing guide, was teeming with seals, sea lions, otters, eagles, and an occasional orca whale. Ha!

We saw one seal and little else. The most interesting part of the jaunt was a picturesque storybook house that could have been built by seven dwarves for a woman with snow white skin, jet black hair, and ruby red lips. You can see the house below.

Our next scheduled stop was Princess Margaret (Portland Island) to anchor for the night and spend the day hiking around the island. The entire island is a nature park with several trails and a sandy beach. I quickly concluded it would an unfulfilling experience so I talked Rich into going to Sidney Island, a funky-shaped island with a large sandy spit on the north end. In addition, a brick factory once flourished on the island.

Rich programmed the wave points and an hour or so later, we dropped our speed to a few knots as we made our way towards a row of mooring balls on the sandy end of the island. As we always do, we watched the depth meter to ensure we didn’t hit shallow water. As we got closer so did the bottom of the bay… really close… like seven feet in depth!

Rich’s knuckles were white as he clinched the wheel, trying to figure out what direction to turn to get into deeper water. We saw a few boats already moored so we knew the bay was deep in various places. The problem was we were at low tide and in a sailboat with a deep keel. It felt like hours, but it was probably only half an hour before we navigated to a mooring ball in fifteen feet of water.

There were quite a few people tied up to the stationary dock; they appeared to be locals from Vancouver Island, who’d motored over for the day to enjoy the sunshine and the wide, sandy beach.

We initially headed towards where the brick factory once stood. As we walked on the sandy path, we occasionally saw a broken brick and I thought “Oh, that’s interesting. A few bricks are left.”

After a few minutes of walking, we came to several large, grass-covered depressions. It was very picturesque. Reading the sign, we learned the area had once been hilly, but had been excavated to extract the clay for bricks.

We walked further and saw several foundations and twisted metal, the remains of the Sidney Tile and Brick Company buildings, brick-making equipment and furnaces. The company operated between 1906 and 1915 and employed hundreds of men to cut and haul wood for the furnaces, mine clay, work in the factory, and load ships bound for cities in need of building materials.

To our delight, as we wandered through the ruins, we listened to classical guitar music, played by a man on a picnic bench. Under a large tree, we found a fallow deer horn, which I picked up and stuffed into my backpack. It was probably illegal to take the horn, but I couldn’t resist! It cleaned up nicely with bleach once we got home and is now next to the deer horns we found in Texas, and goat jawbone from the British Virgin Islands.

The closer we walked to the shore where the brick factory had been located, the more bricks we saw. At the waterline, there wasn’t a trace of sand. Only broken bricks. It was surreal to see so many bricks, sprawled across the beach and into the water.

After getting our fill of the historical site, we circled back and headed to the opposite end of the island. With the tide rising, Rich was insistent we not dawdle. Sure enough, as we got to the far end of the island, we had to take off our shoes, roll up our pants and walk across a rivulet of swiftly flowing water, which fifteen minutes earlier, had been a trickle.

The sand was so soft and white that I didn’t want to leave, but the sun was setting and the water rapidly rising. Begrudgingly, I got into the dinghy for the ride back to our boat.

After a satisfying day, we went to sleep with the hope the next day would bring great weather for our trip across the Haro Straits to Lime Kiln to see the orca whales that were reportedly in the area.

Our luck ran out on Thursday morning.

We woke to rain, cold, wind, and misery. As we approached San Juan Island, the weather got worse. “Oh please,” I begged the weather gods, “I want to see the orca whales.” Obviously they didn’t hear me because the winds seemed to be growing stronger by the minute. As we got close to Roche Harbor, Rich turned into the bay and headed straight towards the customs dock to check back into the United States.

Several people on the dock grabbed the lines I threw as Rich gunned the boat into the dock. With strong winds, you can’t be meek about docking. Once tied up, a custom officer approached our boat to inform me one of the bumpers I tied onto the boat was too low, and she noticed we narrowly missed hitting a large cleat on the dock. Groan.

I just wanted to cry because I’d waited an entire year to sail down the Haro Straits to see the whales! And now I had to wait another year. Even more distressing, there were three pods of orcas in the area, which is very unusual.

At the end of our trip, I bumped into my instructor from my bareboat sailing course. She’d been out with a group of students and said there were orca whales everywhere… and they were even chasing after their boat!

While I was chatting with the custom officer on the dock, Rich went into the custom’s office with our passports. The officer came out to verify that I was the only passenger. Of course, I was still on a tirade about not being able to see the orcas. So the officer whipped out his cell phone and called his friend, a tour boat operator, to see if any orcas had been cited that morning. Nope.

Even if we wanted to go back into the Haro Straits and brave the weather, chances were that we wouldn’t have seen any whales until later in the day when the tide changed direction and the salmon started swimming up the straits. 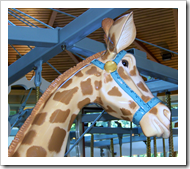 It didn’t matter because we were expected in Friday Harbor, where they were going to try to fix our sail. A few hours later, we pulled into a slip and called the charter company. A man zoomed up to our boat in a small craft (it was barely a boat). He elicited our help in taking down the sail, explaining he had less than an hour to get it to the sail loft for repair.

Friday Harbor is okay. I’m not enthused with Friday Harbor after visiting towns in the Gulf Island. Friday Harbor is the largest town in the San Juan Islands so it has a little of everything from a West Marine store to art galleries, yarn store, antique shops, realtors (lots of realtors), sizable grocery store, restaurants, bars, etc. After having our sail removed, we wandered around a bit while drinking tasty coffees.

After dinner, we decided a shower was in order, but we had no change so we spent half an hour or more trying to figure out how to get change with limited options. With it being late in the season, many of the stores closed early or were simply closed until the spring.

The marina laundromat didn’t have a change machine. A bartender in one of the few open eateries claimed he didn’t have change. Finally, we walked to the grocery store and Rich bought a pack of gum and a newspaper… and was able to get a handful of quarters.

Refreshed after the shower, we looked forward to getting our sail back first thing in the morning and then sailing to Rosario.

We got our sail back the next morning, but the ripped tab was crudely sewn and the handy man didn’t have the means to retrieve the halyard from the top of the mast so he recommended that we use the topping lift and thread the sail up the mast. We gave it a try and it looked okay, but after the handyman left, Rich and I concurred that we had no faith in his jury rigged fix. We pulled down the sail, tied it to the boom and backed out of the slip…