Thanksgiving is drawing to a close. After our gluttony, we took naps… Rich on the futon and me on the bed. He’s now watching a dreadful swashbuckler flick from the 70’s.

We awoke this morning in Mount Vernon to falling snow, which continued until early afternoon. It rained a tad, but not enough to do much more than turn the snow slushy. It’s now 40-degrees outside so the snow will probably melt rather than turn to ice. 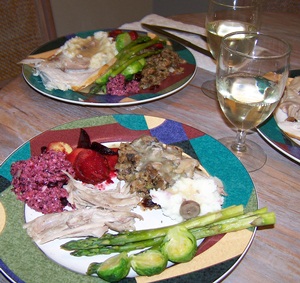 After baking cookies, I dove into Thanksgiving preparations, followed by eating, cleaning up, and then squishing everything into our bar-sized refrigerator. One of these days, we’ll get a full-sized refrigerator, but at this point, we get by using creative food packaging (i.e. foil instead of storage containers).

Here’s what we had for Thanksgiving:

Turkey — Several years ago, I brined a turkey and it was so salty; we could barely eat it. Nevertheless, with the brining fad in full swing, I decided to give it another try. Wednesday morning, I washed and dried a turkey and rubbed a mixture of sea salt, pizza spices, and oregano on it. I’d bought the pizza spice in bulk so I didn’t mind wasting it.

I then chucked the turkey in a small trash bag and plunked it back in the refrigerator. This afternoon, I washed off the brine mixture, stuffed it, tossed it into a cooking bag (less mess), and cooked it for three hours.

Rich and I both agree it was of the best turkeys we’ve ever eaten. Lesson: Use more spices and less salt

Stuffing — I’ve been significantly cutting back on sugar, flour, white rice, and carbohydrates. Wanting to stuff the turkey, I used Dave’s Killer Bread Killer Good Seed Bread, which is made with 100% whole wheat and lots of yummy seeds. I added sautéed garlic, onions, and celery, along with parsley, cranberries, apples, fresh sage and oregano, seasoning salt, and water to moisten.

Roasted vegetables — I’m not a fan of yams. Neither is Rich. When I went shopping for Thanksgiving fixings, however, the bins of yams were beaconing me. I choose two varieties of yams (they looked identical once peeled), a sweet potato, and three small beets.

I cut the vegetables into thick slices, combined with allspice, cinnamon, and white sugar (leftover from the snickerdoodles), and placed them a pie pan, and baked for an hour, tossing the vegetables occasionally.

Scrumptious! The allspice and cinnamon counterbalanced the sweetness of the potatoes and beets. Even Rich took two servings

Fresh Cranberry Relish — I make this every year because I can’t eat turkey unless it’s slathered with cranberries. I first pulse in food processor a handful of walnuts and then place in a bowl. Next, I pulse a large orange, including the peel. A bag of cranberries are pulsed next and then combined with the walnuts and orange. I add a touch of brown sugar and a large scoop of fresh pomegranate seeds.

Refrigerate until ready to serve. I could eat this concoction year-round.

Gravy — I boiled the turkey giblets the day before, chopped and combined with some of the juice from the turkey bag. I brought it to a boil and then stirred in slurry of flour and water. I wish I’d brought rice or tapioca flour. It’s better than regular flour. Even so, the gravy turned out flavorful.

And… I microwaved a few asparagus and brussels sprouts to bounce out the turkey and starches. We tend to eat a dark green vegetable every night.

Rich insist he can’t have Thanksgiving without mashed potatoes. To save time and effort, he decided we should microwave a bag of Idahoan Baby Reds. These potatoes are so tasty and easy to make that they should have a warning label on them!

Finally, because I was steeped in making cookie doughs and putting everything together for our Thanksgiving dinner, I didn’t have time to make a dessert. Rich, therefore, bought a Marie Calendar pumpkin pie with Cool Whip. I’ll skip the pie and just eat the Cool Whip!