Continuation of our trip along the Washington coast in late December… We had a long drive to our next stop, Sequim. Along with way, we passed through Forks, a tired timber town of less than 3,200 people (without fangs). Named after the forks in the nearby Quillayute, Bogachiel, Calawah and Sol Duc rivers, its biggest employer is the Clallam Bay Corrections Center and tourism surrounding the quest to find Bella Swan, Edwin Cullen, and a host of other vampires and miscreants. There was a multitude of stores selling Twilight clothing and collectibles, along with tours of the town.

Having safely traveled through vampire territory, we headed to Neah Bay, the most northwest point of the continental United States and also the home of the Makah Indian Nation. The town of 900 people is known for its eco-tourism and exceptional halibut, ling cod, and sea bass fishing. Across from Neah Bay is Vancouver Island, Canada.

Rich was looking forward to walking around Cape Flattery trail, considered one of the most breathtaking views on the Pacific Coast. Because the trail is part of the Makah Indian Reservation we needed a visitor pass. With the day getting late, and knowing we could only stay at Neah Bay for an hour or so, we simply drove through the area. While Rich ran into a local supermarket to buy us something to drink, I climbed on top of the motor home and snap the photo to the right of a fishing boat leaving Neah Bay. 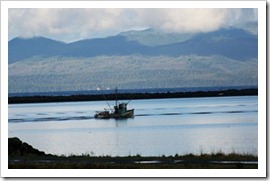 The drive to a campground in Sequim was longer than expected with our arriving moments before the sun disappeared for the day. We slipped into a secluded spot near the restrooms and were the only people in the park, besides the camp host.

It being our last night on the road, Rich decided to splurge and purchased two 50-cent tokens for the shower. Even at home, we usually shower together. But with no family showers at the campground, we decided to use the shower in the men’s room. We figured we’d be “safe” for the fifteen minutes it took to jointly shower. What we didn’t count on was the shower stopping after three minutes (one token) instead of six (two tokens).

I’d dawdled in rinsing off because I thought we had plenty of time. When the water abruptly stopped, I was covered in suds in areas, which can be challenging to rinse. Rich, dripping wet and naked, had to make numerous trips to the sink around the corner, dampen a wash cloth, and then sprint back to the showers so I could wipe off the soap.

Oh the fun of camping when you’re trying to cut corners!

The next morning brought sunshine, but no relief from the biting cold. Bundled up with hats, scarves, and gloves, we wandered towards the water, across a charming covered bridge, and then across a floating dock, where a seagull peacefully perching on a sign, taking in the sites or maybe wondering where he might swoop down and snag a tasty fish.

After an hour or so, we pulled up camp and headed to Port Townsend. As we approached, the sky darkened and snow started to lightly fall, adding to the accumulations of snow already on the streets. We enjoyed a quick lunch in the motor home before venturing out to the Northwest Maritime Center, a recently completed complex with a chandlery; boat-building facility; warehouse to store kayaks, skulls, and other small boats; coffee shop, meeting rooms, and much more.

Catty-corner to the maritime center is the Jefferson County Historical Society. Because it was very cold outside with intermittent snow, sleet, and rain, we decided to see the exhibits, which are housed in the Port Townsend City Hall building, and former municipal court room, fire hall, and jail. The latter was my favorite because it contained an exhibit called “Sin at Sea Level: Bars & bordellos, shanghaiing, smuggling, murder, mutiny, and other mayhem in early Port Townsend.” The ladies-of-the-night were very enterprising and their photographs showed many to have been very attractive.

In the courthouse were intriguing relics from Chinese and Japanese immigrants who set up shops and influenced the culture of the area. Most likely many didn’t have much money when they left their native lands so they probably couldn’t afford to bring only a few trucks of possession to America. What they chose to bring included inkwells, pens, mahjong tiles, ornate clothing, and ceramics.

A large toolbox of woodworking tools, including a variety of lathes for creating spindles was of interest to Rich. Many of Port Townsend’s historical homes are ornate with Victorian details.

Late in the afternoon, we drove the motor home onto a ferry and headed to the east side of the Puget Sound, Coupeville on Whidbey Island. The blustery day turned into a spectacular sundown as the ferry left the dock. Sipping coffees and nibbling on the last of our snack foods, we reflected on our trip along the Washington coast and how for the most part, we hadn’t been impacted by the weather.

Little did we know it would take an hour to drive ten miles along the snowy, congested street that runs from downtown Burlington to Mount Vernon. Rush hour traffic combined with a sudden snow storm made for very slow driving! 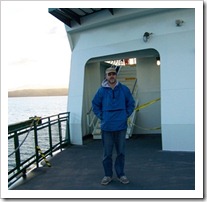 This summer, we’re looking forward to returning to the Olympic Forest for a few days of camping and hiking. If you take a ferry from Seattle to Bremerton, it’s an hour’s drive to the east side of the forest and another hour or so to the coast.

The cats are equally excited about going because they like the attention, sleeping in front of the heater vents on the floor of the motor home, and scratching in their litter box when we’re trying to sleep.