Traveling, especially across country, in today’s topsy-turvy environment of terrorist threats, exacting TSA requirements, and unpredictable weather is tentative at best. Adding to the uncertainty, are unforeseen consequences, such as landing at Chicago O’Hare and taxing for seemingly half the length of the flight – across runways, over freeways, by scores of lumbering planes, past several terminals, and around a flock of wandering Canadian geese and their goslings.

While we thought we had over an hour between our connecting flights from O’Hare to Reagan International in Washington, D.C., we had minutes to sprint and line up to board. So much for leisurely purchasing and eating one of Chicago’s famous hotdogs with screaming yellow mustard, relish, onions, pickle spears, tomatoes, and a dash of celery salt!

Then again, the start of our trip wasn’t particularly relaxed.

We had decided to take an afternoon flight the day before our sailboat charter so we we’d have a full day to drive to Rock Hall, Maryland where we were chartering a 32-foot Hunter sailboat, called Carol Cattie. It was a good plan. We’d have Thursday morning to finish packing, tidying up the house, and getting everything ready for the pet-sitter – a necessity with six cats and four birds.

The morning started with my checking my work emails and then dashing to the dentist to have my retainer tighten, a dreaded device meant to straighten my bottom teeth. When I got home, after a quick check of my work emails, I dove into packing, cursing at myself for having not started sooner. I’d amassed a pile of clothes and necessities on the bed, which Rich was supposed to cram into one of two huge canvas Army duffle bags. Having traditional suitcases on a boat takes up unnecessary space.

As expected, my desire to have 1.5 outfits for every day of our vacation wasn’t a workable plan, given the limitations of the duffle bags. Rich proceeded to have me choose which pink shirt of the two I wanted to bring. Did I really need four pairs of shoes for ten days? And why was I taking three bathing suits?” There was actually only two bathing suits, but Rich counted the top and bottom of one suit as two suits. Men!

Heated discussions ensued as we debated whether to pack light with shorts and short-sleeved shirts (the last time we chartered in the Chesapeake, it was scorching hot) or bring heavier clothing, which was more in line with weather forecasts. Adding to the uncertainty was a co-worker’s comment that 80-degrees in Virginia with 90% humidity feels like 100-degrees.

Once the duffle bags had been packed and re-packed, we set to work with the household chores of cleaning kitty litter boxes, taking out the trash, closing up rooms (and ensuring no cats were hiding in them), and watering the indoor and outdoor plants.

Finally, ready to go, we hopped in the car, took a deep breathe, headed down the street, went back to the house to make sure the garage door was shut (it was), and then confidently zoomed down the freeway to the airport. We arrived seemly hours before our flight, but time zipped by and before we knew it, we were buckling up our seatbelts and stowing our carrying-on bags under our seats.

Because we planned to have a famous Chicago-style hotdog at O’Hare, we only brought nibbles for the flight. The latter proved to be our only substance until 1:30 a.m. when we visited a 24-hour McDonald’s across the street from our motel in Arlington, Virginia… more about this adventure later in my convoluted tale.

With clear weather, we had an uneventful flight to O’Hare, reading and nibbling on Jellie Bellies, dried fruit and nuts, packaged crackers and peanut butter, two cookies, and two bags of mixed mysteries, which were distributed with our Dixie cups of soda.

When we finally got off the plane – after nearly 45-minutes of taxiing everywhere, but our gate – we had no choice, but to sprint to our Washington D.C. flight. Our delight of getting on the plane was quickly replaced by concerns the car rental company would probably close before we touched down. Our concern rapidly eroded into a reality as we waited to take-off… and fumed over the missed opportunity to have a Chicago hotdog!

Rich meanwhile, frantically called the car company. We were expected to land around midnight. The car company, which was several miles from the airport, closed at 12:30 a.m. Their advice, “Get on the shuttle bus once you land.”

And that’s what we did. We landed at around 12:20 a.m., and Rich, with the bag of electronics, sprinted across the airport while I leisurely made my way to the luggage carousels, wondering how I was going to carry over 80-pounds of duffle bags plus my carry-on bag, and my trusty netbook, Sputnik.

Rich made it to the car company seconds before they locked the doors. I retrieved our bags, putting the heavier bag over my shoulder along with my carry-on and Sputnik. I then lifted/dragged the other duffle bag, pausing every thirty feet or so until I made my way out the terminal and across the street to where Rich picked me up.

Once settled in the car – and figuring out all the buttons and switches – Rich booted up the GPS he brought and we were on our way…kinda’. Rich was very tired and kept taking the wrong exit. When the “helpful voice” on the GPS said “turn…” Rich would turn before he heard the rest of the instructions. The “voice” would promptly respond, “re-calculating!” Granted, D.C. isn’t the easiest city to negotiate with many freeways and large, fenced and guarded complexes, necessitating going “around” instead of “through.”

We finally reached the Days Inn in Arlington, Virginia, which was two motels melded into one: A three-story, blocky building with a Thai restaurant on the bottom floor and a handful of rooms on each floor located off a central hallway, and a traditional, L-shaped two-story building with rooms accessible from the outside. We had the last room on the second story of the blocky building. Before we lugged up our duffle bags, we checked out the room… 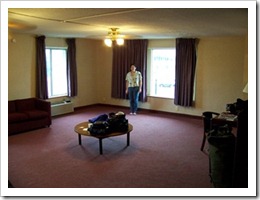 Bizarre is the word that came to mind. It was a huge room with two fans lazily spinning on the ceiling. Taking up about a quarter of the room was two queen-sized beds with attractive bedspreads and fluffy pillows. On the wall, where the door was located, was a rickety, pressboard entertainment center with a television. Several inches below the top of the entertainment center was the switch for the fan and lights. Rich found it by following the electrical cord from the fan, across the ceiling and down the wall!

Next to the entertainment center was a small desk with a chair and lamp. Across from the door was a worn sofa. And in the middle of the room was a low, circular coffee table. Check out the picture to the right.

Concerned about cooties, bed bugs, and other critters, I insisted that our luggage be confined to the middle of the room, preferably on the circular table.

At one time, I suspect the building was a small apartment complex, which was why the room was so large. In spite of the room having a strange aura, we were happy to have a place to sleep!

Our final to-do for the day was to fill our stomachs, which were on west coast time and demanded attention even though it was 1:30 a.m. Amazingly, across the street from the motel, several fast food restaurants were still open. We opted for McDonald’s. Rich had a hamburger and fries while I opted for their snack size fruit and walnut salad. Very tasty!