The following essay was written by my grandmother, Rose Ridnor. I found it humorous because I’m often precariously balanced on a ladder, in the middle of summer, trimming the dead flowers off our two lilacs in Mount Vernon, WA. And while I have the clippers, the nearby apple trees also gets a trimming.

The lilac tree was long overdue for pruning. This particular morning, after spending almost two hours pulling weeds, cutting, and cleaning up the front and side of the house, I was finally ready to begin trimming the lilac. When I as more than half done, I found I was getting terribly tired.

The burning sun had followed me all morning, making my face flush and sticky with sweat. My legs ached from leaning against the runs of the ladder, my hands were stiff from wielding the clippers. I just had to finish. Stop now and who knows when I could get back to it. So I pushed harder with the clipping and snipping to finish faster.

I was concentrating hard on lopping off a heavy branch, my mind as blank as it could get, when out of the blue, a line of words popped into my head. It was odd. I eased off a second to repeat it to myself, “I can always plant another tree, but I can never grow another me.” 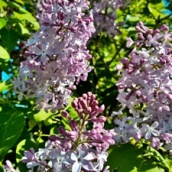 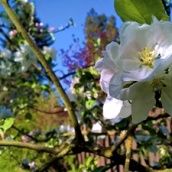 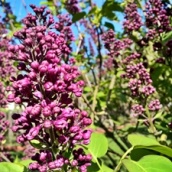 Quickly, I fathomed its meaning, and for a moment was tempted to heed its message. But no, I couldn’t stop now. I had to finish.

But it kept bugging me. Why am I pushing myself? What am I out to prove? I have just so much energy, exhaust it, and I’m finished. The tree doesn’t give a darn whether I cut off its dead flowers or crowded limbs. It will just go on doing what it has to do: Grow and produce more flowers that will die, and I’ll have to cut off.

I set the clippers down, stepped off the ladder, went into the den, and plopped into a chair. I could feel the tiredness ease out of my body.

Ten minutes later, quite refreshed, I went out, put away the ladder and tools, left the sweeping to Morris [husband], and that was that! I didn’t hear one word of protest from the lilac tree.

Life is a constant weighing of the importance of one’s own self in relation to everyone, and everything else.