On Saturday, my husband and I attended the Naval Air Station Whidbey Island (NASWI) Open House. Along with touring several planes, including the P-8A Poseidon, P-3C Orion, and a restored World War II era PBY-5A, and walk around an EA-18G Growler, we had the opportunity to chat with pilots, engineers, radar technicians, firefighters, ground crew, and other support personnel.

We also saw K-9 working dogs, a helicopter search and rescue simulation, two types of drones (thought they’d be bigger), and much more.

Driving home, I had several thoughts. First, today’s armed services are less focused on “boots on the ground” and more on using technology to survey, detect, and counteract. Intelligence rather than brute force is central to protecting lives (military and civilian), and curtailing conflicts before they escalate.

What’s more remarkable, however, is the passion, determination, and pride of service members. They love what they do and are eager to answer questions, describe their jobs, and share their experiences. I learned Growlers can fly within two feet of each other (unbelievable), how repelling equipment has been adapted for search and rescue, and how technicians land surveillance drones by “snagging” the tip of a wing on a taut vertical wire. 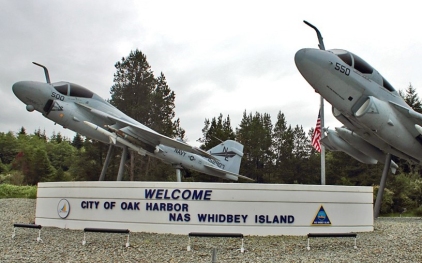 The Navy recognizes the importance of ensuring service members and their families have the resources they need to be successful in their jobs and lives. This includes medical, dental and vision care, housing, job training, education, equipment and uniforms, affordable food, household and personal goods, and support services such as banking, home loans, and relocation.

They recognize fighting men and women, whether enlisted or an officer, can’t fully devote themselves to the vital job assigned to them if they’re worried about whether their spouse has medical coverage, their children have enough to eat and access to quality schools, and their families have clean water to drink and safe air to breath. They shouldn’t be deterred from getting additional training or pursuing an advanced degree because they’re fearful of encumbering massive student debt.

A strong Navy and other armed services invest in their people. And they understand this investment is necessary to increase job effectiveness and satisfaction.

Obviously, a child in a military family who has adequate housing, food, and good schools is going to outperform the child who’s homeless, has food insecurities, and goes to a school that’s underfunded and run-down.

Someone who leaves the military with a degree, job training, and little to no debt will have an easier time of accumulating wealth, investing in a house, and starting a family than someone who is saddled with $20,000 or more in student debt.

The health benefits of being in the military translate to preventative care that can identify and inhibit tooth decay and illnesses before they become acute, including prenatal care to minimize premature births and birth defects through proper nutrition and medical care.

No doubt, there are issues with military benefits and programs that can be improved, especially veteran housing, health and mental services. The observation is proving necessary services leads to more dedicated and focused soldiers and officers.

In 2105, 13.5% of Americans (43.1 million) lived in poverty. Eighteen percent of which were children, many of whom probably went to school having spent the night sleeping in a car, shelter or worse, on the street. Today, one in five children (nearly 17 million) have food insecurities, meaning they don’t have enough to eat, which is why food lunch programs are so important. And until the Affordable Care Act passed, 50.7 Americans (close to 1 in 5) were uninsured, including small businesses owners, sole-proprietors, contractors, and people who worked part-time or for company that didn’t offer insurance.

How effective would our military be if 14% of soldiers didn’t have enough money to feed their families? Would you want a soldier trying to do their job while they had untreated pneumonia, bronchitis or another communicable disease? Would you want an enlisted woman who gave birth a few days earlier to return to work because she didn’t have paternity leave? Or a marine mechanic to work a second job to make ends meet? Would you want a highly trained pilot or technicians to die because they couldn’t pay for chemotherapy, diabetes supplies, or repair a heart murmur? How effective do you think a soldier would be if their family became homeless and were living on the streets, while they were on a mission?

It’s worth thinking about because an American is an American. Yes, people in the military make many sacrifices to protect our freedoms and have the potential to be killed or injured. But the greatness of America depends on ensuring everyone can achieve their potential from a premature infant to a child with learning disabilities, teenager preparing for college, young adult starting their first job, mid-career professional who’s laid off, and senior citizen looking forward to retirement, having worked for forty or more years.