We do not mean to ask too much, O Lord. Or the impossible.

We simply ask that you grant us the ability to maintain our lives, and those who depend upon us, if not for the better, at least not worse than we are doing today.

This evening, one of my husband’s oldest friends is visiting from Israel. He’s ultra-orthodox and will be staying for two and a half days. Because he keeps kosher, after Rich picked him up at the airport, he stopped at a grocery store on Mercer Island, so he could buy food for his stay.

In advance, I purchased two new plastic cutting boards and knives, and kept them in the original packaging so he could see that they were unused.

When he arrived, he set to work preparing his food, asking for unused plastic utensils, paper plates, etc. He wanted some garlic, but the only garlic I have was chopping in a food processor and frozen. Not clean. He then wanted lemon juice, which I’m surprised he didn’t nix since I may have handled the bottle while preparing meat and milk dishes.

He then proceeded to wastefully use yard-upon-yard of foil to wrap a trout he wanted to cook. I totally lost my cool. Why do you need 5-6 layers of foil?

I inquired. And he said, “I don’t make the rules.”

While I appreciate his rigor, I think he’s sadly missing the point, which is cleanliness, avoidance of certain foods (i.e. pork), and not mixing meat and milk. One or two layers of foil would have been sufficient in my spotlessly clean, less than a year-old oven, in which 100% of the food I’ve cooked have been in casserole dishes.

I can’t imagine going into a person’s house, and making insane demand to support my beliefs (and stinking up their house by baking a smelly fish, see above). And if I had such stringent beliefs, I’d do whatever was possible to avoid being an imposition, including opting not to visit.

What does this have to do with my grandmother’s invocation?

My grandmother kept kosher. Kinda’ kosher. She didn’t eat shellfish or pork, didn’t mix meat and milk, and tried to abide by dietary laws. With that said, she freely ate at other people’s houses and restaurants, and didn’t impose her needs on others.

Until she passed away at 90 years old on November 1, 1997, she maintained her quality-of-life, living in her Burbank house, under the care of live-in help. Granted, the last few years of her life, she was very frustrated when her eyesight disappeared, she could no longer write, and anger bubbled up through her usual optimism.

When I called her on Saturday mornings, she’d tell me she dreamed of angels. I told her to follow them, but she clung to life. She had an insatiable curiosity, every morning, standing in the hallway by the heater vent, sipping a cup of diluted while reading the daily paper. And until the last few years of her life, she wrote like crazy: On scraps of paper, on the back of envelopes, and on her small, black, manual Remington typewriter.

She never tired of learning something new from taking an interest in my studies and jobs to national and worldwide politics. So much of who I am today is because of her teachings, encouragement, and love.

It’s hard to believe my grandmother passed away 20 years ago last Wednesday. Sometimes I think she visits me.

Yeah, that sounds crazy, but before I started writing this invocation, before Rich showed up with his visiting friend, I was looking for a photo in Unsplash to illustrate this invocation. For some reason, a thought kept popping in my head, “Look for the house.”

I typed “Frederick Street, Burbank” into a search engine, and gasped when the address “1625 Frederic Street, Burbank” immediately popped up as a listing on Zillow. The house was for sale.  Her house, my grandparent’s house had been listed a few weeks ago. 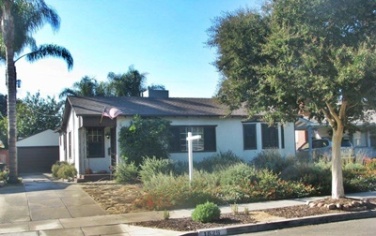 At first, I thought it was a mistake. Of all the houses on the street, surely it wasn’t their house, which was for sale.

Even though the house had been drastically remodeled, there was no mistaking the two fireplaces, front bay window, garage with the attached out-buildings, and lay-out of the front room, kitchen, and dining room.

I’m still feeling a bit unhinged over the coincidence of been “nudged” to look up her house, and discovering it within a minute.

I wonder if she’s seeing the house through my eyes? It’s not impossible.