Continuation of our trip to San Juan Island

Day Two of Zipping Around on Gatsby

The next morning, the guest at Hillside House gathered for breakfast around 8:00 in the common area, a sizable room with groupings of comfortable chairs, around an inviting fireplace. The coffee tables and shelves were filled with games, magazines, books, menus from local restaurants, and tourist brochures.

Around 8:30, Naomi, the hostess greeted everyone and shared the activities that were happening on the island, along with what was being served for breakfast. Her son bakes breads and cookies during the day, and her husband makes breakfast, which typically includes homemade bread with jam or preserve, homemade granola with fixings, bowls of fresh fruit, and a “main” course like quiche or caramelized bacon French toast, which we had the following morning.

Breakfast, served in their spacious dining room, was very organized with plates and napkins on one side of the granite bar, the food in the middle, and an array of beverages at the other end. It was fun to chat with the other guests while enjoying a relaxing, delicious, home-cooked breakfast and compare notes on what we were going to do for the day.

After breakfast, we grabbed our motorcycle gear and headed to American Camp. Many of the National Park Service “guides” are volunteers who spend 3-4 months at a park. They tend to be retired couples from other states who are passionate about educating visitors and doing something different than their previous jobs. When we visited Diablo Lake in eastern Washington at the beginning of the summer, the guide had previously been a music and band teacher in a small Kansas community. He’d start teaching kids to play instruments when they were in elementary school. By the time they reached high school, they could perform in marching band.

The guide at American Camp was super enthusiastic and a bit “caustic” towards English Camp, explaining the British had ready access to supplies, just across the water in Victoria, Canada. Whereas, the browbeaten Americans had to make do with whatever was sent to them with most supplies being allocated to troops fighting the American Civil War. There was no denying, American Camp was a ghetto compared to English Camp!

In addition, American Camp was in a more windy, desolate area with dunes and unprotected access to the water. It was located at the very bottom of the island whereas English Camp was at the top, by a large, calm bay.

We spent over an hour at American Camp, wandering around the dunes, walking down to the beach, and chatting with the guide and a Forest Ranger, about life in the camp. Evidently, it was very monotonous with daily drills and routine maintenance coupled with months of dreary weather. Several men committed suicide and deserted during the 14 years the camp was inhabited.

Our next stop was the Lime Kiln Lighthouse, which is a prime spot from May through September for whale watching, including orca, minke and humpback. During our trip, we learned resident orcas don’t have enough salmon to eat, which is why the three pods in the Puget Sound aren’t growing. The rare births have resulted in unhealthy calves like the one “carried” around for days by the mother in late July.

Also jeopardizing orcas is pollution and pharmaceuticals. Most large marine animals have traces of various drugs in their tissues, including amphetamines and antidepressants. Smaller fish are exposed to the drugs, which are “flushed” into seas and waterways. Larger fish eat the smaller fish, increasing the concentration of drugs and chemicals in their systems.

Research has shown that salmon, which are exposed to these drugs have a 45% lower survival rate than salmon in clean water, further depleting salmon runs.

Despite learning about the peril of orcas and salmon while at Lime Kiln, we visited the whitewashed, vintage 1914 lighthouse, which is perched on a rocky bluff. The lighthouse still functions as a navigational aid for ships passing through the Haro Straits, between US and Canada.

After dawdling at Lime Kiln for an hour, we continued north to English Camp to check out the reenactments, compliments of the volunteer park rangers who bring a wealth of skills. Our first stop was the traveling forge, adeptly tended by a retired school teacher from the east coast who was an accomplished blacksmith. He was teaching a man, dressed as a British solider, how to wrought a coat hook.

Firing a musket at English Camp on San Juan Island 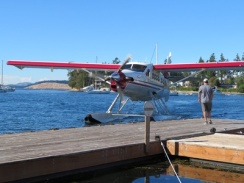 It was fascinating to learn about the quality of coal used in the forge and why it makes a difference in the outcome of wrought items. The guide also elaborated on the type of tools and household items that were created by blacksmiths (practically everything in the camp), and length of time to become a blacksmith, starting as an unpaid apprentice when a boy was 10 or 11 years old.

Seeing another “British soldier” discussing how to load a long musket, we thanked the blacksmith and wandered over to the demonstration. It’s a lengthy process to load a musket, including needing at least two opposing teeth to rip open the cartridge of gunpowder. Check out this video to see the many regimented steps.

Most men who were hit by a musket didn’t die from the charge but lead poisoning. During the 14-year stand-off between the Americans and British on San Juan Island there was no direct fighting, just hours-upon-hours of drills.

After learning how to load and fire a musket, we chatted with the carpenter who was making roof shingles and demonstrating how to make a barrel. Making shingles, which seems simple, requires multiple steps and metal tools (created by the blacksmith) to evenly split the wood.

Making a barrel – cooperage — is crazy difficult with the need to not only shape the wood – staves — correctly but bend them to make the barrel water-tight, and then fasten with hoops. Here’s an interesting article on how barrels are made, along with historical videos.

The camp laundresses used barrels to wash clothes with shaved homemade soaps. They would work 12 hours a day, six days a week, pretreating stained clothing with lye or chalk, soaking in soapy water, sometimes for several days, scrubbing on a wooden washboard (made by the carpenter), rinsing, and then boiling the clothes to remove the soap and remaining stains. The clothes were then ready to be hung in the sun to dry.

Laundresses also mended and ironed clothing and made their own soap.

Exhausted from learning about the challenges of living in the American and English camps, we headed to Roche Harbor for a late lunch of wraps, chips, and fruit. We also wandered down to the float plane dock to watch a plane land, taxi to the dock, be checked-in by the border patrol, and then take off for another destination.

It would be fun to take a float plane; however, we’d need to spend at least two hours driving down to Kent, north of Seattle on Lake Washington, to board a plane, only to fly by Whidbey Island an hour or so later.

With the day drawing to a close, we headed back to Hillside House to nibble on their banana chocolate chip cookies, and join the hostess, Naomi, on their large, wrap-around deck to chat and learn more about the history of the bed & breakfast, the challenge of catering to up to 14 guests, including making a unique breakfast every morning, and history of the area.

We were soon joined by other guests, and as the sunset and the evening grew chilly most of the guests were congregated on the deck, talking and sharing stories. We continued our conversation in the living room until nearly 11 o’clock.

I wanted Rich and I to not only spend time together but broaden our horizons by meeting new people and flexing our chit-chat muscles.  It was interesting talking with the couple from New York and learn about the challenges of living in a bustling, very expensive city.

Originally, they had a water-front house in New Jersey, but it was badly damaged by Hurricane Irene in 2011. Not wanting to deal with having to rebuild a house again, they now live in a high-rise. They said many of the apartments in the building are owned by foreigners and are empty for most of the year. The properties are evidently investments and not residences.

A Day to Go and More Adventure

When we originally planned our trip to San Juan Island, we thought we’d be bored within a few days. However, there’s plenty to see and do on the island.

After another enjoyable breakfasts with the other couples, we wandered down to Friday Harbor to stretch our legs and enjoy the hubbub around the ferry dock and marina.

We then returned to Hillside House to pack our striped pillowcases and stuff them into our saddlebags. Greg, the host at Hillside house said we had matching luggage. Ready to go, we headed to Mount Young, which is the highest spot on San Juan Island at 650 feet. From on top of the hill, you can see across the Olympic Peninsula to the Canadian Gulf Island, and several smaller islands… provided it’s not overcast. Our sweeping view was of fog!

We also saw nothing, but fog, when we headed to the far end of the island to Cattle Point to hopefully catch a glimpse of Fidalgo and Whidbey Islands. Nevertheless, I found the short jaunt across the grassy field to the lighthouse on the point, surprisingly Zen. The temperature was cool, but not cold, and the fog buffered any ambient sounds, including the water dashing across the rocks.

While standing on the point, a large pelican emerged from the fog bank and flew in front of us. It was magical.

With the fog determined to remain close to the ground, we gave-up on getting a panoramic view of the Puget Sound, and headed back to Friday Harbor to catch the next ferry to Anacortes on Fidalgo Island. We waited scarcely 20 minutes, and where directed onto a smaller ferry. After chugging across the water, we realized we were on the “slow” ferry to Anacortes with it stopping at smaller islands on the way to Fidalgo.

A little over 1.5 hours later, thoroughly relaxed, we motorcycled off the ferry, and headed to Taco Bell for a late lunch/early dinner. Around 5:00, we were back to Coupeville, refreshed from our 3-day adventure, and our first lengthy trip on Gatsby.